Rules are a special feature of the form builder that provides your forms with an additional level of functionality.   It allows you to hide or show specific fields based on certain criteria and on preceding responses.  For example, you may have a dropdown field with the options of A, B, C, D, or Other.  If an applicant were to select "Other," an administrator can utilize Rules to have an additional one-line text box field called Other appear.  This field would already exist on the form, but would be hidden unless Other were selected.  This example demonstrates the most basic usage of Rules, but there are many other ways to use Rules to maximize the way your applicants interact with forms.

In order to add a Rule based on particular fields, you need to have at least two fields added to your form and have saved that form.  There should be the "If" field (e.g. If State = ___) and a "Then" field (e.g. Then show ___).

Once you have saved your form, you should access the tab of your form builder called Rules: 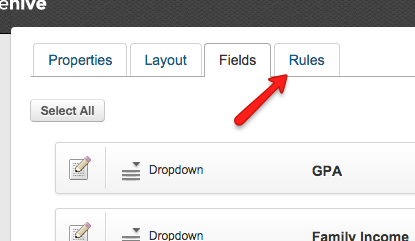 Let's start with the basic "If ___ = Other, Then show Other" example.  In your Conditions section, locate your trigger field in the If Field dropdown.

Finally, what do we want this field to Equal?  Yes, "Other." This is what should be entered, manually, into the final textbox of this particular Condition.

Now that we have a Condition, it's time to add an Action.  A brand new Rule will come with 3 actions by default, but you can add and remove Actions according to your needs.

When you select Show, you will see that the dropdown contains all other fields that are currently on your form so that you can choose the field in question from this dropdown.  We will choose the one-line text box called Other.

For this particular example, we have now created both the Condition and the Action.

Did this answer your question? Thanks for the feedback There was a problem submitting your feedback. Please try again later.
Last updated on June 27, 2016